Someone posted an interesting pet graph on Facebook last week and I found it pretty intriguing since it included "your friend's dog" and a dragon as high on FUN and babies as low on fun and high on effort.  The caption on the one I saw on Facebook was "And people still choose Babies" which I thought was amusing.  Overall, the graph was interesting and pretty funny in a heh-heh kind of way.  Cats rule the internet and anytime we (at my work) do anything with pets on our Facebook page the engagement is high.  We sell pet tags so we consider this relevant content :)  I found the original graph from 2013 on College Humor and read the comments that people have made and decided to remake and update the "fun vs. effort" pet graph.

I changed some pets by adding Pet Rocks and Chia Pets and removing Sea Monkeys & Tomagotchi (which people thought was WAY more work than shown on the original graph).  I also moved some of the other pets around - apparently snakes are more fun and less work and ferrets as more effort.  I deleted ants and tarantulas since they are of little interest (personal bias and that part of my chart was already crowded). I left babies and dragons in the same spot as no-one really complained too much about their placement, surprisingly.  Some people said "babies aren't pets" but it's part of the main amusement of this so they kept their high-effort-little-fun spot on the graph.

I am pretty proud of how it turned out so thought I'd keep an archive of it here by posting it. 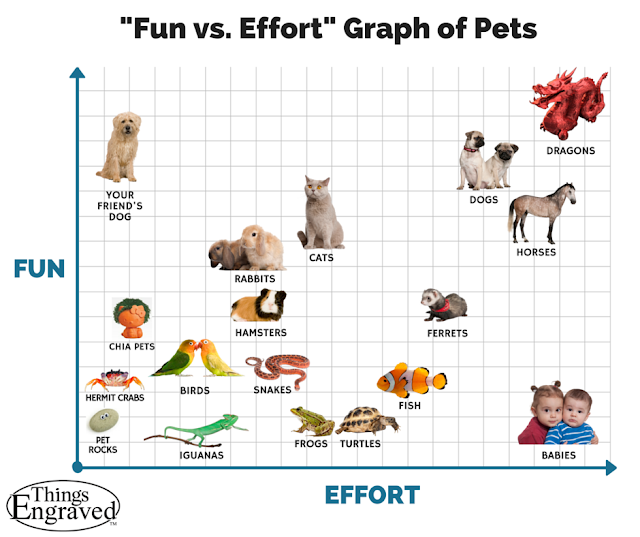 Do you agree with my changes and placements?
Posted by alyshia at 8:18 AM